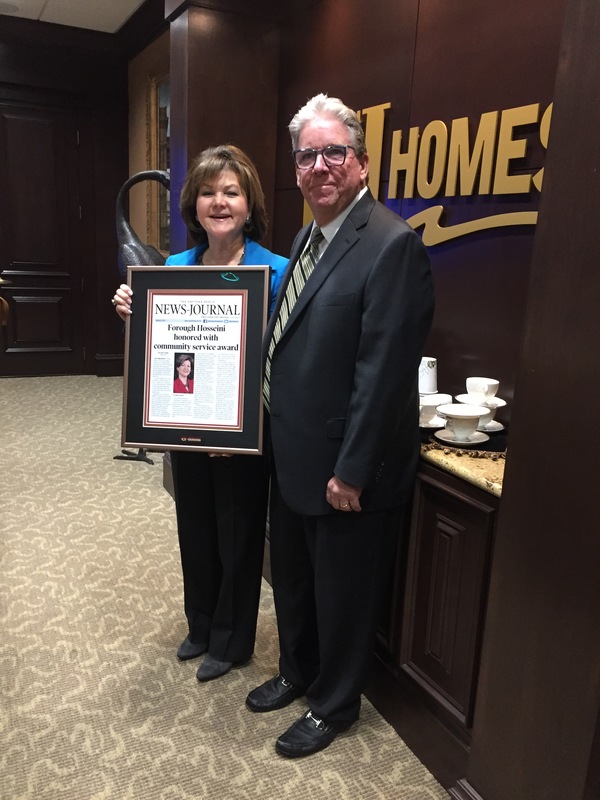 On Thursday, December 5, 2019, outgoing Board member Forough Hosseini was presented with a tribute by Greg Sullivan, Board Vice Chair and the Foundation Board, in grateful recognition for her nearly two decades of outstanding service.   Forough joined the Foundation Board in January 2002, and helped guide the Foundation to a new era of prominence and engagement in the community.

During her tenure, Forough chaired several committees as a working member, providing staff with guidance and inspiration to accomplish ambitious goals for serving those in need.  As Chair of the nominating committee and member of the Foundation’s Executive Committee, she took the lead in recruiting distinguished & community-minded citizens to serve as active and motivated members of the Board itself.

In 2011, Forough was honored with the Foundation’s coveted Herbert M. Davidson Memorial Award for Outstanding Community Service, based on her career commitment to advancing philanthropy in Volusia & Flagler Counties.  This annual award was inaugurated to honor the legacy of the late Herbert M. Davidson, former publisher of the Daytona Beach News-Journal.  At Forough’s final Board meeting this December, she was presented with a framed reprint of the News-Journal story as a gift from the newspaper, that covered her acceptance of this award at that annual dinner event.